“Another FAB afternoon, a few girls came along and performed Raining Men from Dance in Time and some disco routines they are currently working on. Then Sharon led an Acrobatic Dance display. This generated a lot of interest. Although the students had only been taking these classes since September, the improvement was fantastic.” 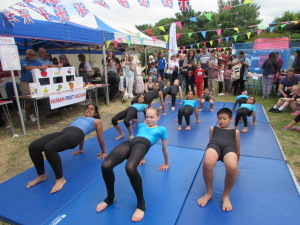 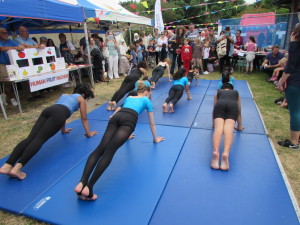 We were invited to perform at the local catholic church in Heston. The last time we performed there it poured with rain and the girls loved it. Halfway through one performance, the rain just fell out of the sky like stair rods. It was exhilarating ! Would it rain again? But no, the sun shone this time. The girls performed two routines from Dance in Time. They were brilliant as always….”

We were invited again to perform at Southlands Arts Centre in West Drayton during their music festival. The weather was glorious and once again we entertained the music fans alongside an Irish Dance Troupe. Conor wowed them with his solo, The audience clapped along to Celebration and Silencio was performed with grace and elegance, showing three diverse genres studied with Babel. Thirteen of our teenagers joined over 600 others to perform in Trafalgar Square for Big Dance on Saturday 2.7.16. The whole adventure was very exciting from Cecil Sharpe House in London, where Charis learned the choreography, bringing it back to our Contemporary class to teach to the students. The mass rehearsal at Kings House Sports Ground in Chiswick was our first taste of the real thing. The rehearsal in Trafalgar Square the night before was surreal. The most beautiful double rainbow sat across the square, creating a wonderful backdrop. And then the performances themselves on 2.7.16. It was a wonderful experience for the girls, their friends and family who came to support us and for me as their teacher. The weather was glorious and even the Brexit march around the bottom of the square added to the flavour and excitement of the day. A memory to treasure. Twenty seven youngsters from Babel had a fantastic day out in London in April 2016. They performed at Her Majesty’s Theatre in the Haymarket along with five other dance schools from all over the country. We took two show pieces with us, “Celebration “, a fun disco number and “Silencio”, a more serious contemporary piece choreographed by Charis.
Rehearsals took place during the Easter holidays and the enthusiasm was fantastic right from the start. Our performers were as young as 5 and as old as 18. The experience will be treasured. The spirit throughout the whole day was akin to a large family on a day out. Everybody pitched in. The older ones helped the younger ones. The Mums who came worked really hard as chaperones. The performance in the evening was the end of a truly heartening and exciting day. The videos below were taken at the dress rehearsal. Avant Garde invited us to join lots of dance groups at The Old Vinyl Factory in Hayes in July 2015. Our Senior Street Monday class performed “Virus” from “Shoestring”. It was a very hot balmy summer’s evening and in front of a very lively audience our students rose to the occasion and did Babel proud.

The Trinity Homeless Project asked if we would produce a Flashmob to promote the charity. We created a dance piece especially for this. The students and Sara worked together and on a busy Saturday morning, we merged into the shopping area, turned on our music, performed and then just melted away. No fuss, no bother, just in and out! A wonderful experience for all concerned.

Hounslow Carnival – in the High Street

Belle, Georgie, Japneet, Alysia, Chantelle, and Zoe rehearsed and took part in the Hounslow Street Carnival in July 2015. They danced, mingled with the crowds, encouraged people to dance with them. Beautifully dressed as cows, they were a credit to the school! And they had a great time.

Virus, Shake Ya Groove and Tick Tock Timber performers went along on a very warm Sunday afternoon and performed for the crowd. The field was huge, but the students all did brilliantly! We had excellent feedback.

Performers from Shake Ya Groove, along with some of our older girls and Conor went along on a very warm Saturday afternoon and performed for the very enthusiastic crowd. We were invited along to this after our Flashmob in Uxbridge earlier in the year. The performances filled in the gaps between bands. We hope to go again!